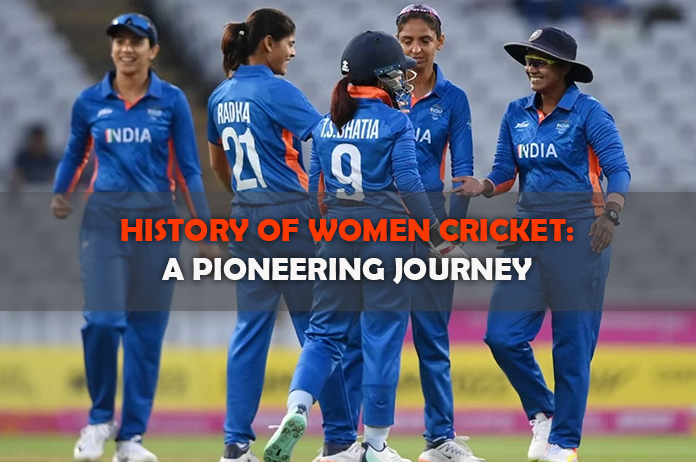 Women’s cricket is not new to India and they have been playing the matches since 1745. At that time, women cricket got no recognition and prominence as men’s cricket superseded the charm of cricket.

In the late 19th and 20th centuries in Australia, England, New Zealand, and South Africa, the establishment of women’s cricket was on the rise. A women’s cricket association was founded in 1926 and in 1958, the International Women’s Cricket Council was formed to create coordinate cricket around the world. he

Thereafter, efforts were made that led to the formation of the Women’s Cricket Association in 1973 in India. Mahendra Kumar Sharma, a cricket enthusiast, solely made the efforts to spotlight women’s cricket in front of the world. He came up to conduct the first-ever national tournament of women matches among the three teams – Maharashtra, Mumbai and Uttar Pradesh in Pune.

The first-ever women cricket matches enticed huge crowds and that’s where the rise of women matches started, recognising it in Indian history.

In 2006, the Board of Control for Cricket in India (BCCI) accepted the recognition of women’s cricket. Later, there were matches in T20, One Day Internationals (ODIs), and Test cricket women’s cricket. With the rise of women’s cricket, there is a huge increase in the number of bettors in women cricket matches. For bettors to get deep into the betting market, let us acquaint you with the women’s cricket tournaments conducted in India that you can bet on.

Women’s Cricket Tournaments There are different cricket tournaments played in women’s cricket in India. Let’s have a look at some of them:

ICC Women’s matches in the World Cup are one of the oldest and most prestigious tournaments for women’s cricket. The championship series include both T20 and One Day International (ODI) formats. Both the formats of the gameplay are popular all across the globe. These matches are one of the most popular choices for bettors to place effective bets. Since women cricket matches under this tournament are conducted on a large scale, the gamblers are likely to make profits out of it.

From the latest cricket updates, the Indian women’s cricket team has made it twice to the finals of the World Cup. The ODI World Cup is hosted once in 4 years, so you would get minimal chances to bet on these ICC women’s matches.

Since 2005, the Women’s World Cups have been hosted regularly at four-year intervals.

During 2018-2019, the BCCI introduced the Senior Women’s Challenger’s Trophy with the aim to promote gender equality in cricket. In this tournament of women’s cricket matches, there are three teams – India Blue, India Red, and India Green.

The tournament has not much recognition in India, so, the bettors may not find the right cricket betting sites to wager. Some sites like 10Cric allow betting on this tournament. Due to less competition, you may have higher chances of winning the bet.

Like men’s cricket, there are many cricket events in ICC women’s matches and other cricket tournaments that you would love to bet on.

In every participating team in women cricket matches, there are top batters who hit significant runs with the bat. If you predict the top batter from either team, based on her previous stats and records, you are likely to win that wager, getting certain payouts when the outcome comes out to be true.

This is another simple wager that is straightforward and you just have to pick the top bowler from teams playing in ICC women’s matches or other tournaments. When you hit the right nerve in the betting market, you get a huge sum in the eventual outcome. Depending on the hype and the cash flow in the women cricket matches, the monetary rewards are defined for each bettor.

No other bet can be simpler than this as the bettors have to predict the winning team playing on the ground. Based on their performances, you have to bet on the winning team. To assure your win, you can bet on both the teams in women’s cricket matches. At the end of the match, if any team wins, you’ll get your reward.

In this type of bet, you need to predict the number of runs to be scored by the end of the first innings. Such types of bets may require you to bet on over/under score in the innings. If your prediction hits right, you are likely to get higher rewards while enjoying women’s cricket matches.

Women’s cricket has come a long way after battling and getting through thick and thin for getting international recognition. The efforts of some people made it possible for women’s cricket to enter the ICC Women’s matches and other tournaments.

In all the tournaments, the bettors leverage the matches and get maximum profitability in the betting market. If you are unsure about placing a bet in the online betting market, you can get free cricket betting tips as per the latest cricket updates. We, at CBTF Betting Tips, encourage you to bet wisely, make independent decisions for betting and earn more in the betting market.

For more understanding on the history of women cricket and various tournaments, check out this blog, WOMEN CRICKET TOURNAMENTS AND LEAGUES FOR BETTING.